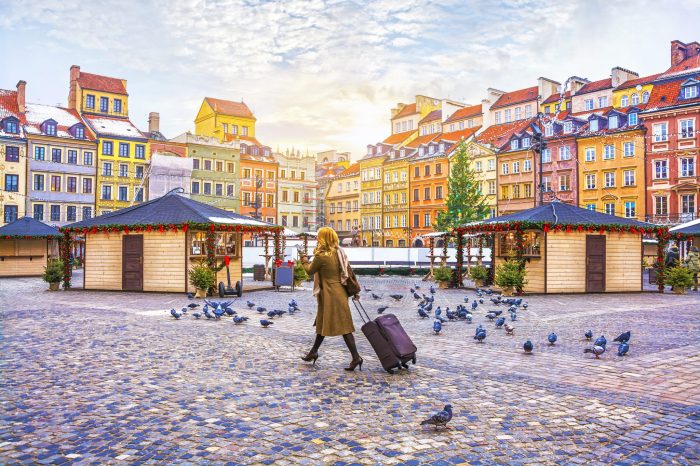 Warsaw is the capital and the largest city of Poland.

It is diverse and surprising as its two most emblematic symbols – an artificial palm on De Gaulle Square and the Palace of Culture and Science. For years, controversial, monumental, beautiful and hideous at the same time, it’s  been a source of hot disputes and historical references. The capital city is the business, cultural and scientific center of Poland. National media and government have their headquarters here  –  and it is enough for Warsaw to become an arena for social discussion, political polemics and artistic comments to reality. Destroyed during the war, it has been laboriously rebuilt and for several years it has been experiencing its renaissance at the same time developing its own brand on the map of Europe.

Warsaw may be a surprise for those visitors who have already managed to get to know other Polish cities. Its center is not concentrated strictly around the Old Market Square – instead, the life of the capital takes place in several important districts, very diverse architecturally, in which micro-communities thrive. Local initiatives give character to specific parts of the city – from their appearance to the culinary or artistic scene. In combination, they create a unique mosaic of interpenetrating colours, aromas and flavours. In Warsaw, social and cultural life flourishes – there are the best museums and theaters, festivals and concerts of world-famous artists. Warsaw is the only such place in Poland, where glass skyscrapers are adjacent to the icon of socialist architecture, artistic palaces are located a few blocks from old, shabby tenement buildings reminiscent of the alternative atmosphere of Berlin, and you can spend the evening at a concert in the Philharmonic or having a barbecue on the bank of the Vistula.

Warsaw has the largest selection of restaurants, clubs and bars in Poland. In the popular Michelin ranking, including the best dining venues in the world, Warsaw has won 30 awards. Thus, it has become the culinary capital of the country, with recognized chefs on board. You will find here the most exquisite dishes, exotic flavours, but also local bars and beaneries. Due to the international character of the capital, world dishes retain their authentic character here – Asian cuisine has been reigning in popularity ratings for years. Culinary journey around Warsaw is not only a feast of flavours, but also an intense experience – from an exquisite meal served on the roof of a skyscraper, through the oldest Polish restaurants, molecular cuisine, tapas bars and the holiday climate of the food trucks festival. The Warsaw phenomenon is the bookstore-cafes, referring to the intellectual roots of the city. It’s the perfect place to spend some time over a cup of coffee and a piece of cake, watching the life of the locals. Popular with both residents and visitors, there are Polish tapas bars: where on a small plate you can taste many specialties that once ruled in Polish homes. Cold legs, herring in cream or gzik-cottage cheese are products that return to favor – especially when accompanied by a glass of Polish vodka to stimulate the appetite. The restaurants that serve such a menu often refer to their décor from the times of the Polish People’s Republic and the aesthetics of socialism – a visit to them is a unique experience and an extraordinary encounter with history.

The night map of Warsaw is a vibrant network of the most popular places in the city – there are exclusive cocktail bars overlooking the city skyline, dance clubs, as well as relaxing spaces on the adapted banks of the Vistula. The Warsaw venues are refined in the smallest detail – starting from a unique menu, through the original interior design, to the music playing in them. The huge selection means that everyone will find a place to come back to with every next visit.

In Warsaw, a sketch of socialist times is visible, which strongly influenced today’s architecture of the city. Many of the pre-war tenements were destroyed during the war – some of them were restored, but some still need renovation. The city’s magnificence is reminiscent of the Royal Palace in Wilanów, the Old Town and the  Royal Łazienki Park . The latter is nowadays a favorite place for a weekend walk in Warsaw – a large park complex with a charming lake surrounds the summer residence of the last king of Poland. In the summer, open Chopin Concerts are held here – everyone can come and listen to outstanding musicians of the younger generation and world-renowned pianists playing the master’s repertoire. The Old Town in Warsaw has a charming atmosphere of narrow cobbled streets, a market square surrounded by colorful tenement houses and the former Royal Castle. It is worth taking a stroll towards the barbican – old city fortifications, and see the Warsaw Mermaid – the legendary symbol of Warsaw. Visiting the capital, you can not miss the Palace of Culture and Science – the icon of the city, rising above the roofs of modern skyscrapers. The palace is a gift of the Soviet people for the Poles, which for many years has been engaging in fervent discussions about the justification for maintaining this building on the map of modern Warsaw. From the observation deck on the 30th floor of the Palace, there is a breathtaking panorama of the capital. 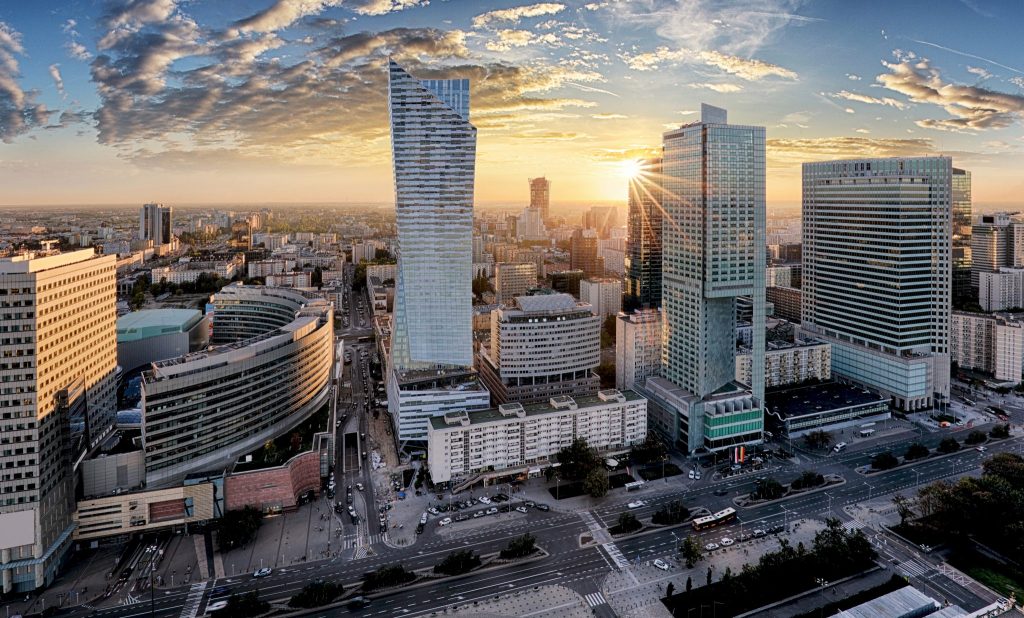 The city played an important role in contemporary historical events, incurring huge losses during the Warsaw Uprising in 1944. The memory of that period was preserved in the interactive collections of the Warsaw Uprising Museum, which next to the Polin Museum of Polish Jews is one of the most interesting museums in the capital. Treasures of art and culture from antiquity to the present day can be found in the rich collections of the National Museum, covering over 830 thousand exhibits. The Copernicus Science Center is the place that introduces the world of science and natural laws in an extraordinary way. Through a network of interactive experiments, multimedia demonstrations and simulations, teaches adults and children about the most important discoveries in the field of science about man and the world. The city’s life is teeming with the banks of the Vistula – it is worth stopping the sightseeing here, and with a glass of wine or lemonade in hand, you should give yourself time to relax after a busy day.

Warsaw has the largest accommodation base in Poland – here are the most modern facilities in Poland, apartments with panoramic views of the city and boutique hotels. The best-connected part of Warsaw is the area of the Palace of Culture and Science, adjacent to the Main Railway Station. There are a lot of hotels in this area, and the distance to the Old Town is only 3 km. In the vicinity of the station there is a large shopping center, and popular bars and restaurants are scattered in the area designated by  Jerozolimskie Avenue and  Świętokrzyska Street. 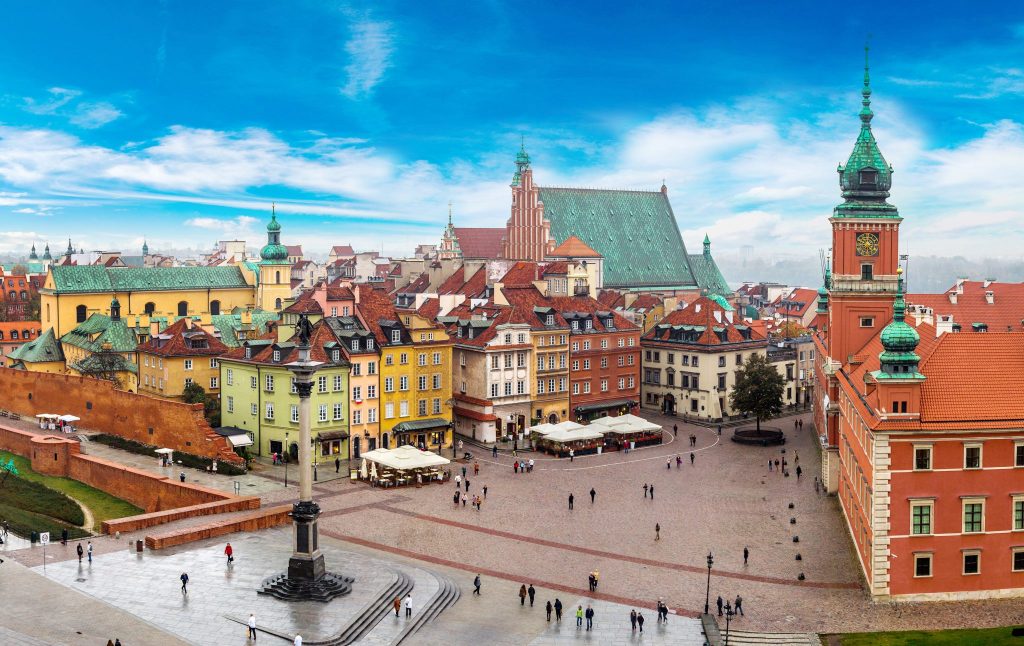 Warsaw has the largest airport in Poland, serving connections with the most important ports in the world. The Fryderyk Chopin Airport is located approx. 10 km from the city center and connected with it by railway and city bus lines. From the airport you can easily take a taxi, but if you do not reserve the car in advance, it is worth checking if it belongs to a licensed corporation. There are some dishonest drivers who charge ridiculous amounts for transporting around the city. The alternative airport is Warsaw Modlin, serving mainly low-cost air connections. It is located about 35 km from the city center and the fastest way to get there is by taxi.

Warsaw is the only city in Poland with a functioning subway. In addition, buses and trams run in the center and on the outskirts. The bus line 180 runs through most of the most interesting tourist places in Warsaw. There are many taxi corporations operating in Warsaw – good use of reliable, guaranteed fixed prices, or ensure private transport around the city.

There is a city bike rental in Warsaw – there are more and more bicycle lanes to help cyclists get around the capital. A pleasant ride can be planned along the Vistula or through Warsaw parks. The way to spend the afternoon and visit the city from a slightly different perspective can be a cruise on the Vistula River on one of the cruise ships or small cozy boats.

Warsaw is the perfect place for you if: